This week (29 October) sees the release of Jo Brand’s heart-warming movie ‘The More You Ignore Me’ on DVD and Lymington’s video store Visual Vibes has teamed up with the movie’s Director to support the Best of British Film in The New Forest. 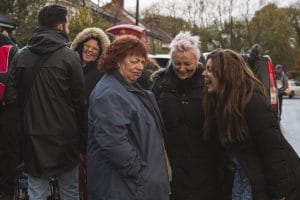 This ‘Good-natured and big-hearted British Comedy’, starring Sheridan Smith and a host of British talent, received some terrific reviews when released in cinemas earlier this summer – getting four stars from both the Guardian and the Mail on Sunday critics and is now being sold internationally.

However South Coast cinema screenings were limited. So, to celebrate the DVD launch, the Director – Keith English, who is based in Lymington, will be in the store to meet customers and promote the film with signed copies for sale.

“In 1996 we set Visual Vibes up as a community hub for entertainment” says founder and owner Darren Baker…and over 22 years later we’re still here! Because, no matter what the big companies tell you, renting a movie from your local video store is STILL the best way of seeing a film outside the cinema. The quality you get from a Blu-ray disc outstrips the ‘so-called’ HD quality of anything live-streamed – that includes Sky Movies. But never mind the better quality – often video rents are cheaper; you don’t have to pay for subscriptions; you get all the add-on features on the disc and our staff will give you knowledgeable advice whilst you browse our extensive range of movies, snacks and treats to make your evening perfect”.

Director Keith English agrees “For years I have rented movies from Visual Vibes rather than stream them. I bring my wife and daughter in and we choose together. It’s a family thing. I mean why watch any movie with compressed pictures and the basic stereo that streaming gives, when you can see them crystal clear and with 5.1 surround sound from a disc – often for less money!”

So the two of them are urging everyone to come along on Saturday November 3rd between 2 – 4pm to get a signed copy of the film, have complimentary coffee and a chat – and get to know the revamped store. As Keith says “It is great to see more and more local cinemas cropping up – like the new Sway Cinema – but it is also really important that we keep places like Visual Vibes alive and not allow all our choices to be made by big companies. We should support all local enterprises like Darren’s”.