Locations was the theme for the Film: New Forest event at Careys Manor hotel on 11th October combined with a Crew Networking evening in partnership with Creative England immediately afterwards.

Cllr Michael Harris, Portfolio Holder for Local Economic Development, Property & Innovation at New Forest District Council, opened the event. He stated “We want to give attendees a better understanding of what it is like filming on location and the challenges this can bring, as well as what is expected of a location manager and how Film:New Forest can help anybody’s property become a filming location.” 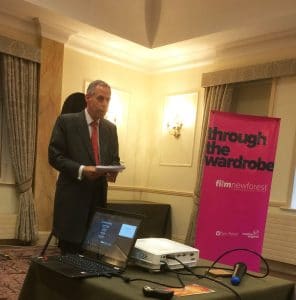 Leon Francis from Creative England gave an update on the partnership between Creative England and Film:New Forest. As well as their large database of filming locations and the sorts of enquires they receive. He stressed the importance of giving as much detail about your property as possible to make it easier for them when assisting location managers in their search.

Keith English from Velvet Pictures was the main speaker for this event. Keith directed ‘The More You Ignore Me’ which was released in cinemas this summer. Keith gave a background to his film where they used around 30 locations filming for 28 days across 5 weeks. 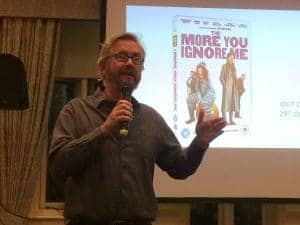 The majority of their filming took place in Blackpool as they received funding to locate there. Keith stressed the importance of making the absolute most of the time you have on location; maximising every moment possible to film as anytime you spend not filming is wasted. The location needs to be commutable from the place the cast and crew are staying and easily accessible.

Although it is possible to dress the location to suit whatever period it is being set in it is always better if you can find a location which already suits the era. It also saves money if the location can be used for more than just the one scene, so you need to be flexible and open minded when scouting. When scouting for a location Keith also suggested that it is important to be polite and courteous when looking for a location and filming on location too. He suggested that you find somebody who knows the local area well, as they will be able to provide you with all of the local information you need to know which will save you huge amounts of time.

When filming ‘The More You Ignore Me’ many scenes were filmed in a house as the family home of the central characters. Keith and the crew were incredibly careful whilst filming in the house and as a way of saying thank you re-carpeted and re-wallpapered after filming had completed. As much as this treatment is lovely it shouldn’t wavier in your decision as to whether or not you want your property to become a filming location. You have to be committed if you choose to become a filming location.

Matt Callaghan, Economic Development Manager at New Forest District Council, closed the event by showing where, on the Film:New Forest website, you can register your property as a filming location. He once again stressed the importance of giving as much information about your property as possible as this helps us help the location manager as well as getting your property noticed.

The Crew Networking part of the evening was a great success where a variety of industry professionals and students were able to share contacts with one another.

Thank you to Careys Manor for hosting this event and to our speakers Leon Francis and Keith English.