Local young filmmakers are being encouraged to apply for the BRITISH FILM INSTITUTES FILM ACADEMY delivered by WHITE LANTERN FILM to develop their movie careers!

Now in the sixth year, the academy supports the regions emerging film-makers helping them reach for the stars!

The BFI Film Academy course, GET INSIDE MOVIES, will be led by industry experts and will cover every area of the film industry, enabling young people to develop the commercial and cultural knowledge and skills to help make a career in film a reality.

The course starts on November 24th and young people aged 16 – 19 years old can apply now by visiting www.getinsidemovies.co.uk until 12noon on 9th November.

The BFI Film Academy offers training for every film industry role, from script-writing through to directing and production, sound design, editing and camera, and provides learning around film history and cinematic storytelling to inspire an appreciation of film culture. 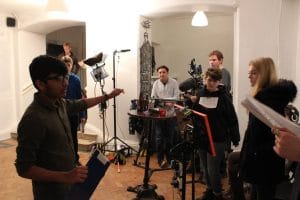 Producer and Managing Director of WHITE LANTERN FILM, Adam J Merrifield comments: “Bournemouth has a lot of talented young people and the BFI Film Academy can kick start their careers in the film industry and you never know, we might have a future Hitchcock, Kubrick, Scorsese or Tarantino right here!” “We’re now onto our sixth year having helped 100 young people take their first steps into the industry.”

Past Bournemouth graduates have gone on to work at Pinewood Studios, the BBC, have established their own production companies, crewed local feature films and attended the National Film and Television School. Support after the course continues BFI mentoring and career advise together with White Lantern Film’s own Alumni programme.