Last night (28th February) our CREW networking evening at Careys Manor Hotel saw us debut our promotional short film to over 80 attendees. We teamed up with film critic Mark Kermode and Creative England to create this four minute cinematic-quality film to promote the New Forest to prospective film makers.

“Through the Wardrobe” features BBC and Observer film critic Mark Kermode, who is a New Forest resident, extolling the values of the area as a place to film.  And it was Mark who first coined the wardrobe phrase, adopted by Film:NewForest, to sum up how it feels to be in the New Forest; as if you are going through the back of the wardrobe into Narnia.

Cllr Michael Harris, Portfolio Holder for Local Economic Development, said “Our film features breathtaking visuals and certainly showcases what this area has to offer.  The hairs on my arms stand up every time I watch it, and it captures the variety of possibilities and locations available in the New Forest beautifully. 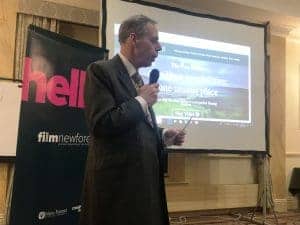 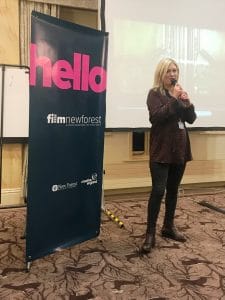 This short film will further boost the New Forest’s reputation for film and TV, which will focus on attracting high-profile productions to come to the area.

Figures show that a major feature film spends just over £42,000 per day on local employment and services and high-end television dramas up to £17-22,000 per day, which is important for economic growth in the area.

We are already seeing a boost to the local economy and local businesses because of this partnership, as well as keeping an eye on our other aim of protecting this unique and special area.”

As the opportunities for film and TV industry in the New Forest continue to grow, local residents and businesses can benefit by registering their properties on our location map and services and skills on Creative England’s national database.

Hayley Armstrong, Production Liaison Manager for East & South East at Creative England said: “We are incredibly proud of this film which beautifully captures the vast array of locations available in the New Forest, but we are always looking for more locations and would encourage local residents and businesses to consider registering their properties as potential film and tv locations with Creative England.”