The award is for the ‘Most Innovative Small Business Friendly programme, Campaign or Project’.

Delighted to receive the award on behalf of the project Cllr Barry Rickman, Leader of New Forest District Council, said (Monday 10 September): “A key element of the Film:New Forest project is supporting local businesses by attracting filming productions to this area.

“A location database has been set up, and we have a local crew and services database which productions often chose to access rather than bring staff with them. This means that local independent companies further benefit from the investment opportunities which this project brings about. This award recognises the great work that is being done as part of Film:New Forest to support our local economy” 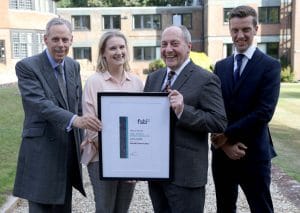 Film and TV drama crews shooting on location can spend up to £40,000 per day in an area on local goods and services, and with the recent success of the New Forest being featured in ITV’s ‘Unforgotten’ and Channel 4 documentary ‘A Year in the New Forest’, NFDC are seeking to expand their filming locations database.

Location owners and industry professionals can register their premises or services on the Film:New Forest website free of charge.