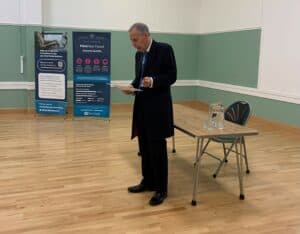 Attendees were welcomed to the event by Cllr Michael Harris Portfolio Holder for Business, High Streets and Tourism at New Forest District Council and learnt about the Film:New Forest initiative and the benefits it can bring to the New Forest Economy.

Matt Winter, a Lymington based location manager, whilst unable to attend in person, submitted a presentation which was delivered on his behalf by Sally Igra, Economic Development Team Leader. His presentation included how a location is found, known as the scouting process, the types of properties location scouts require which is not just manor houses, but also range from typical housing estates to disused sheds and farmland.

Matt used a case study of a recent production he worked on, The Midwich Cuckoos, and showed the 52 locations required once the script had been broken down. It then detailed how the location fees were broken down in terms of shoot days and preparation and strike days.

The attendees were then shown a trailer for an upcoming film Future TX, due to be released in cinemas in October. The film stars Griff Rhys-Jones  and was all filmed locally with one of the locations used in Lyndhurst! The trailer can be viewed: https://youtu.be/VjMrGJ7JeGU 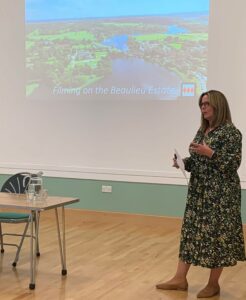 Attendees then learnt about what it is like to have a production film within your property from Rachael Goldstraw who is the Head of Marketing & Business Development at Beaulieu Enterprises. Rachael’s presentation outlined the productions Beaulieu had worked with and recent filming which included Salvage Hunters and Kings of the Wood.

Rachael then gave an overview of what is involved when a production wishes to film at either Beaulieu Motor Museum, Buckler’s Hard or in their Estate which can include several visits by the production team before filming begins and being prepared for long days.   Rachael gave tips from their experience as a filming location such as being flexible and to discuss and set out your terms of engagement upfront and include them in the location contract.

Natasha Davies from Film:New Forest detailed how to register a location on the New Forest locations database. Natasha advised attendees to read the Location Toolkit and emphasised the key messages which were to think about the quirky features of your property that would be interesting to a location scout and to ensure good quality photos and a detailed description are included in their location database entry.

All of the presentations can be viewed below.

Sally Igra, Economic Development Team Leader at New Forest District Council gave the presentation on behalf of Matt Winter who was unable to attend in person.

How to register your details on the database Expand