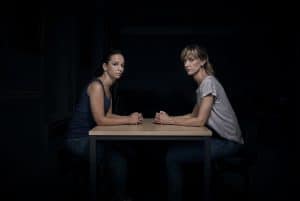 At the heart of the series is the dangerous relationship between Leah and Rose. What begins as a seemingly open and shut case of academic deception quickly spirals out of control and end in fatal consequences. This triggers a devastating sequence of events that threaten to engulf both women.

ITV describes Leah and Rose as “two fiercely intelligent minds unwilling to back down” and promises that Cheat will “keep audiences guessing from the start, exploring just how far we’re prepared to stand up for what we believe, and at what cost.”

The series was produced by Two Brothers Pictures, the production company set up by writers Harry and Jack Williams that also brought us The Missing and Liar.

Those who played close attention in the final scenes may have spotted Holmsley Passage (near Burley).

Matt Winter (Location Manager Magic Pictures Ltd) said "Having scouted much of the home counties for a location that perfectly suited the brief, I eventually offered up an option that I happened to know as a New Forest resident. The director loved it enough to agree to bring the crew down from London for the shoot. I would love to bring more productions down this way, not just because I live here, but also because the area offers so much."

Director, Louise Hooper said "We spent a wonderful day filming in the gloriously beautiful and bewitching New Forest for our thriller CHEAT. It features in the final act and was a perfect setting to add mystery, atmosphere and scale. Thanks to all who helped us with our filming. Hope you enjoy the show!"

To view other films and TV programmes shot in The New Forest visit our filmed in the area page.