On Thursday 26 July (at the New Forest Show) Councillor Harris, accompanied by a life size Star Wars Storm Trooper, officially launched the Film Festival: New Forest for 2019, which will take place from 8 – 16 June next year. He said: “Filming brings real economic benefit to the New Forest, both in monetary terms and in the opportunities it provides for skilled employment. Next year’s 'Film … END_OF_DOCUMENT_TOKEN_TO_BE_REPLACED 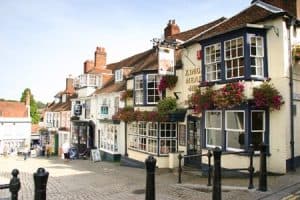 We are celebrating another filming production success by way of the widely acclaimed ITV cold case drama series 'Unforgotten' which premieres series 3 on ITV on Sunday July 15 at 9pm. The drama series; produced by Mainstreet Pictures stars Nicola Walker (Spooks) as DCI Cassie Stuart and Sanjeev Bhaskar (The Kumars) as DI Sunil 'Sunny' Khan and follows the pair as they work a cold-case and the … END_OF_DOCUMENT_TOKEN_TO_BE_REPLACED